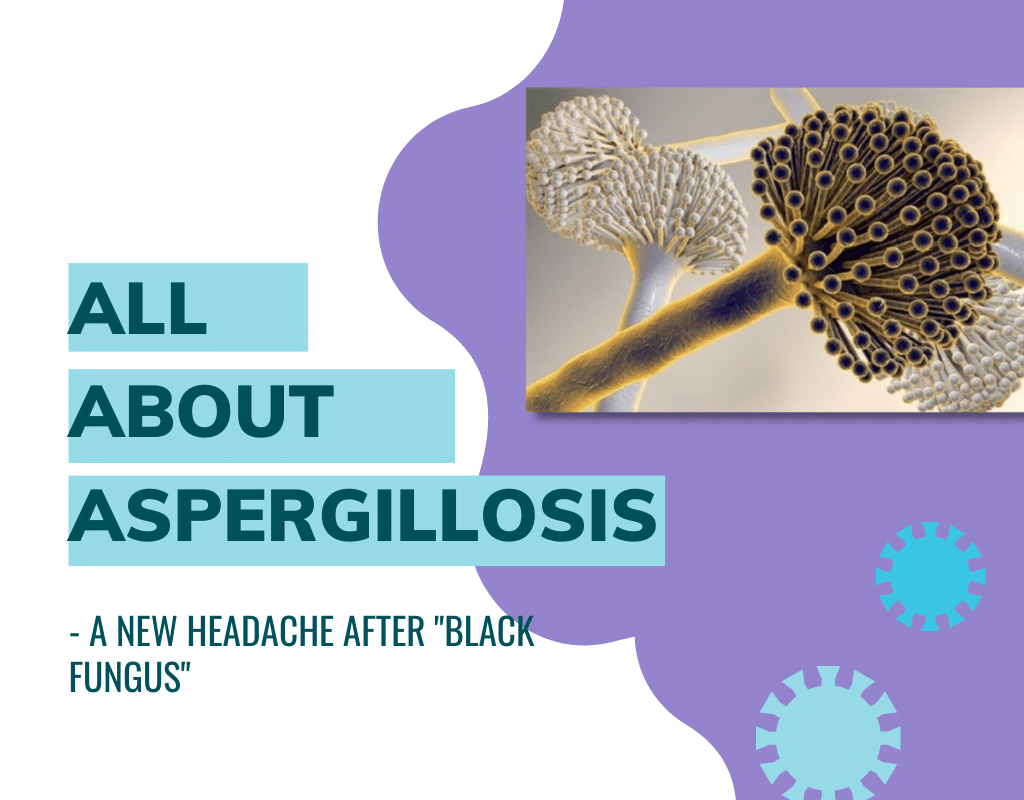 Till date more than 11,700 cases of black fungus have been reported in India. Maharashtra and Gujrat are the most severely affected states by the disease. Now doctors have reported more than eight new cases of a replacement mycosis called “Aspergillosis”.

What is Aspergillosis Fungal Infection?

Aspergillosis is an infection, fungal growth or allergic reaction which is caused by Aspergillus fungus. This fungus is found both indoors and outdoors and lives on decaying vegetation or dead leaves. Everyone comes in contact with this fungus on daily basis, but never contracts the illness.

1). Allergic Bronchopulmonary Aspergillosis (ABPA): is an allergic or hypersensitive reaction to a fungus known as Aspergillus Fumigates. This is fungi usually found in the soil. The immune system overreacts to the antigens of Aspergillus Fumigates found in the lungs. This may result in to damage the airways and result in permanent lung damage. It commonly affects people with asthma or cystic fibrosis.

2). Allergic Aspergillus Sinusitis: is a common type of fungal infection in the sinuses. It usually results in thick fungal debris, sticky mucus and blockage of the infected sinus.

3). Azole-Resistant Aspergillus Fumigatus: it occurs when fungi develop the ability to survive and grow even when exposed to the antifungal drugs designed to kill them.

4). Aspergilloma: it is a fungus ball or mycetoma composed of Aspergillus Hyphae along with cellular debris and mucus. It basically colonizes the pre-existing cavity in the lung parenchyma and forms a fungus cavity.

5). Chronic Pulmonary Aspergillosis: is a long term fungal infection caused by members of the genus Aspergillus. The term describes several disease presentations with considerable overlap, ranging from a clump of aspergillus mold in the lungs through to a subacute, invasive form known as chronic pulmonary Aspergillosis.

6). Invasive Aspergillosis: it usually occurs when Aspergillus causes serious infection and usually affects people who have weakened immune systems, such as people who have had an organ transplant or a stem cell transplant. It mostly affects the lungs, but it can also spread to other parts of the body.

7). Cutaneous (skin) Aspergillosis: it usually occurs when Aspergillus enters the body through a break in the skin and causes infection, usually in people who have a weakened immune system.

Who Are At Risk

As there is the extreme use of steroids for curing COVID-19 patients, lead to the compromise with the immunity of the patients and the non-sterile water used for hydrating the oxygen supply is also being responsible for its occurrence. The illogical use of steroids in the treatment of COVID-19 is one of the major reasons behind the rise in black fungus cases. Thus, health professionals are being warned to use steroids with full caution and not to overdo them.

Firstly, an X-ray or a CT scan of the sinuses is done to detect the infection. The second option is biopsy through nasal endoscopy. Apart from these, medical experts sometimes even recommend a polymerase chain reaction (PCR) based blood test to detect the presence of the fungal infection.

What Is Covid Delta Plus Variant? How Harmful It Is and Can It Cause the “Third Wave in India”?

Get all latest content delivered to your email a few times a month. Updates and news about all categories will send to you.